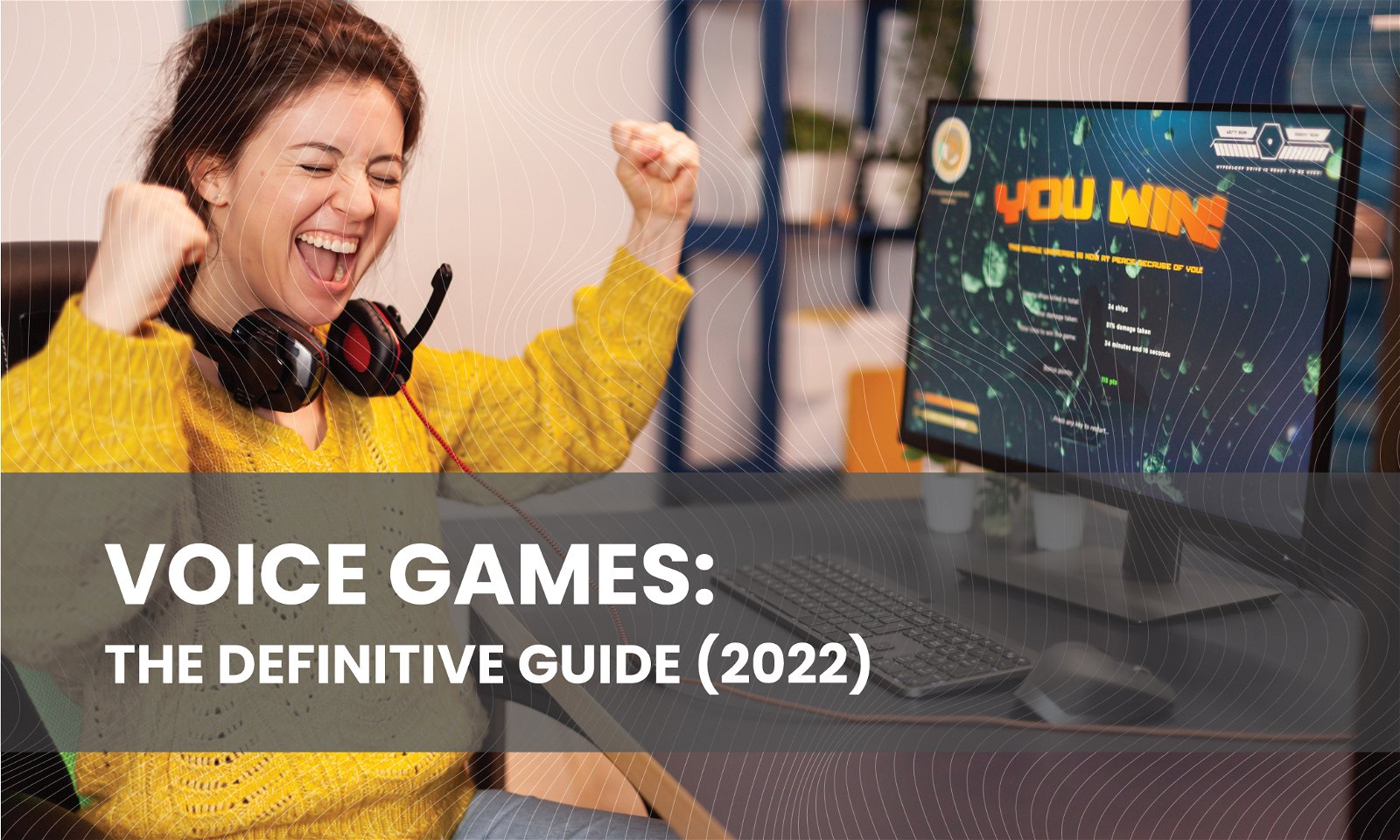 In this guide, we will learn what voice games are about and how voice can be an integral part of gaming. If you stick around, we may even talk about voice gaming in the metaverse, how cool is that!

What are voice games?

With a voice-controlled game, you can control your character and interact with others through speech.

Players are also able to immerse themselves further into gameplay thanks to yet another layer of integration.

Furthermore, voice control lowers the learning curve for beginners, since figuring out controls is more natural voice controls can be implemented in many different genres of games like action, RPG, simulation and more.

In science fiction, human-computer communication has been a recurring theme for decades.

At the time these shows were made, smooth communication with computers belonged more to science fiction than reality.

The first Home computers and video game consoles of the early days were only capable of producing blips and beep bops, which we are familiar with from early classics.

However, recent developments have brought this vision closer than ever to the real world.

In today’s generation, with the increase in the development of voice technology, voice games have also taken a steady stride as voice is now implemented in a way that users can chat with other gamers using voice and many games of different genres are developed with the focus of voice being used as controls.

The challenge of voice games in 2022

Voice games, being an early concept, have their own share of problems like every other new technology out there

The challenge for game developers is to account for the hundreds of hours of speech data that are needed to build voice-recognition algorithms that allow these games to run smoothly because at the moment, AI technologies have a hard time understanding certain modulation of languages and slangs common gamers use when they are playing.

For players based in different cultures, developers must consider accents, dialects, and whole languages.

There is also the issue of gathering and accounting for all the different possible phrases or commands that a user could use within the context of a game.

Only recording and implementing a handful of expected phrases without accounting for natural language utterances means the player might never say the “correct” phrase to trigger a response.

There are many factors that contribute to the smooth functioning of speech recognition.

As a gamer, there is nothing more frustrating than having to repeat yourself, only to be met with your character’s impassive yet eager stare.

The other part of the problem is the process of development and integration of voice technology in games.

it’s already incredibly difficult to develop and build a game as it requires hours of planning story, concept, plots, and not to forget the hours, and possibly, months of designing and coding all the necessary components.

With the development of cloud data management and efficient tools to help store data online, voice games have good hope of being able to perform and be open to the public, disregarding their culture and background.

Alright enough with the boring stuff, the fun part of the article begins now!

Here is a list of all games you can play that have voice technology integrated into them. You can control and clear all levels in the games using your voice as a control.

All the games presented here are available on Steam and some of them are free, so no excuse to not try this technology out.

There Came An Echo by Iridium Studios

Follow a complex, character-driven sci-fi plot: Corrin, an ordinary cryptographer, becomes embroiled in a mortal world of secret agendas when a group of mercenaries track him down Santa Monica, California.

Val, a mysterious figure who guides Corrin, must evade an enemy with seemingly limitless resources and discover which secrets his own unbreakable algorithm, Radial Lock, protects information that, when published, will shatter the foundations of the world.

SoundSelf: A Technodelic by Andromeda Entertainment

SoundSelf is an exhilarating journey into altered states of consciousness powered by your own voice.

Using your voice, you can generate a hypnotic world of sounds and visuals that feel like they are coming directly from your body. Harmonize these sounds with you, as you drift through strobing tunnels-of-light, impossible shapes, and deep into a meditative trance.

You can read their study here

In Verbis Virtus by Indomitus Games

In Verbis Virtus, you live the life of a wizard in search of ancient power. You can explore temples and various places. The best thing about this game is the fact that you can cast spells using your voice in Maha’ki, the language of the gods

Have you already dreamt of being a general with an entire army at your command?

Radio General is a strategy based game where you take up the role of an army commander of the war. Execute commands and fight your enemies all by using your voice. By combining voice recognition and the voices of their actors, you will feel like a general on the line with your troops

Combined with speech recognition technology and AI, you can manage and guide a variety of aircraft on and off an active runway.

It is your job as a tower controller to make sure that aircraft are safe when boarding or departing. Assign taxiways, stop and start movements and clear aircraft for takeoff.

The future of voice games

Now, voice recognition is being used in games with more complex controls, like the VR-compatible Starship Commander, which allows players to converse with non-playing characters.

Popular eSports games such as Overwatch and Call of Duty even use the technology. The players use speech recognition to communicate with one another in these games.

However, it will be an even greater achievement when the technology is used in the actual gameplay.

With its players, fans, and revenue increasing year after year, eSports is one of the fastest-growing forms of entertainment around the world.

Over 9,500 players are registered as professionals, over 299 million people view eSports videos, and over 3,765 tournaments are held all over the world.

As speech recognition becomes more widely adopted by other eSports games, it will boost the technology’s growth across the gaming industry in general.

The development of modern, open-world games presents its own challenges, as they must anticipate a multitude of possible scenarios and sequences of plot and character dialogue.

In addition to global languages, inflexions, and vocal variety, speech recognition can present an even greater challenge.

Through the use of more advanced artificial intelligence, however, these challenges will be overcome as technology advances.

And there you have it! , we have completed this article!

Are you thinking about playing any of these games? Or is there any game you’d like us to check out? Comment it down here!

Also, don’t forget to share this post with your friends and family and make yourself look cool!

Thirsty of more information on voice AI? Check out the other posts on our blog and follow us on social media for some exclusive content!

Get a demo on my site

Ask a free demo on my site